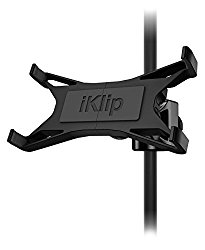 It's every musician's nightmare: You're on stage. You're performing. But then something goes terribly wrong and your tablet — which you're using to perform — suddenly crashes to the floor and its screen splinters into a million little glass pieces. It's enough to give anyone a heart attack. Now you can alleviate your fears and perform with confidence thanks to IK's new iKlip Xpand. It's an adjustable tablet holder that uses four expandable grips that can hold most large tablet sizes securely. Its rubberized "Gorilla Grip" technology holds your iPad or tablet on a microphone stand, and its ball joint design allows for infinite adjustment so you'll always have an optimal viewing angle.iKlip Xpand features several breakthrough technologies that allow it to hold virtually any tablet with a screen size from 7" to 12.1". You can even use it without removing the protective case of many of your favorite devices. First, iKlip Xpand features a patented expandable holding bracket that utilizes an expansion "memory" bracket which allows you to quickly and easily mount an iPad — or similarly sized tablets — to a microphone stand. Its rubberized "Gorilla Grip" backing ensures a firm grip of the device that neither scratches nor mars your tablet's surface. Its ball joint global positioning system lets you precisely position your device at any angle for optimum viewing in both landscape and portrait modes.

Do you want ot get the IK Multimedia iKlip Xpand universal mic stand support for iPad and tablets?

We use cookies to give you the best experience on our website.I accept